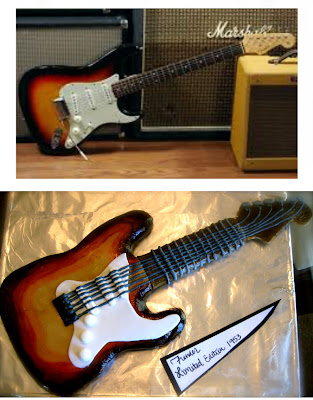 This is going to be a longer post than usual...it's about my Dad. I consider myself a very lucky girl, I have grown up in a household that appreciates the arts: especially music. When my parents met, My dad was in a band, and my mom was at one of his shows. So from before the time I was (as he would say), "a twinkle in his eye", he has been a involved with music.

As a child, I had different memories from other kids who listened to maybe "Baby Beluga" by Raffi on the way to school- my dad played me Stevie Ray Vaughn's version of Mary Had a Little Lamb, which as you can imagine, had a lot more jive. I was always embarrassed by differences like this, especially when the overly amplified electric guitar jam sessions were coming from my house on the block. But this year, on my dad's 58th Birthday, I was reminded of just how much I appreciate this about him.


As a kid, it was a running joke that when encouraging me to be successful someday, my dad had a funny way of mentioning what I could possibly afford for him-like a corvette, a new guitar, fill in the blank. Some would call this mild brainwashing, but I guess it worked, because this year I could not wait for his birthday to come for the opportunity to turn his most favorite guitar into a cake- the starburst colored Fender Stratocaster (pictured above on top, and as a cake on the bottom). When downsizing years ago to prepare for an out-of-state move, he ended up selling his Stratocaster, and hasn't had one since. So being able to replicate this in a chocolate, edible form would be my way of affording him his favorite guitar until the day I can get him the real thing. Funny enough, I arrived that day to notice, the very same guitar as the desktop picture on his computer, and news that he had just won a contest at work, affording a gift certificate to buy the non-edible, real, music producing version of his favorite guitar- go dad!

To top off his birthday celebration, my dad brought out his classic guitar, and played for us two newly written tunes. As mentioned above, I grew up listening to my dad jam, but since it's been some time since I have lived at home, I haven't had this opportunity in awhile. It was such a cool experience seeing my dad do what he loves to do, and to understand as an adult, just how talented he is. In fact, it nearly brought me to tears hearing him play for the first time in years. Dad, I am so glad me and Tara got to make your guitar cake, thanks for being so supportive of my business and my talents, and for inspiring us with yours. I can't wait to make you next years cake....I know exactly what it will be!
Posted by Amanda at 8/10/2011