Today I began the quest of my cupcake tasting adventure. I have been collecting names of places I wanted to visit to get a feel for what flavors they're serving, pricing, ambiance, location, and most important, the taste of their cupcakes! I still plan on specializing in cakes, but I find that cupcakes are becoming more popular, I am getting more requests for them, and the flavors out there are getting even more creative! Who doesn't love a tiny little cake?

"Caketini"
So I traveled to two places today I had received recommendations about. The first one was in my own backyard, Caketini in the San Tan Village Mall. It was a perfect little stroll over from Brio where I had lunch with a friend. After some wonderful dining, we ventured over to this cute little shop on the North end of the plaza. I was very impressed with the ambiance when we walked in, very clean, pretty and not too busy looking in design. In addition to the cupcakes, they had a cake pop selection, and a display of a custom cake, which was very nice as well.

Now for the cupcakes- since I went there with the purpose of tasting different flavors, we loaded up with a Chocolate Raspberry, Red Velvet, and Carrot Cake cupcake as well as a Chocolate cake pop. my favorite was the Chocolate Raspberry, which was a moist, rich chocolate with Raspberry Buttercream frosting. I would love to know how they flavored their frosting because it didn't taste artificial. The flavor combination was great and had the perfect blend of both chocolate and raspberry. I also loved their Red Velvet and Carrot Cake cupcakes, and their Cake Pop. It appeared that the Cake Pop was made with a dark chocolate, it was very yummy and rich in taste, and they looked extremely elegant as well with a long lollipop stem and a bit of luster dust.

"Cupcakes"
My second tasting today was at Cupcakes, in North Scottsdale near the Borgata. I was recommended this shop by one of my best friends, who gave it raving reviews, which matched the reviews online. So I decided it was worth the trip with one of my friends to do a tasting. The location, near my previous digs in Scottsdale, was extremely convenient near some favorites of mine, Houston's, Humble Pie, Blanco Tacos, and Fashion Square Mall. The name, Cupcakes, is short and sweet, and there is no need to wonder what it means. The decor is creative, with their Food Network Cupcake Wars Display, Manequins they were asked to design for Barney's New York, which fit the cupcake theme and the many articles featuring their store lining the walls as you walk up to the cupcake counter. It is no secret this place has become very well-known locally, and after reading on the website, I found out it's been visited by many celebreties, giving them a great PR boost! You better beleive I was already jealous even before I tasted their delicious cupcakes.

After trying some more traditional flavors earlier in the day, I felt like venturing into some creative tastes.  With catchy names like "Momo", "Skinny Mini", and "Mimosa", I found myself asking about the flavors from none other than one of the shop owners herself behind the counter. After getting into conversation about the flavors I started to ask her questions about starting her business. She was super friendly and very open about their success story, sharing their experience with me. What great fortune these two sisters have seen in their first ever business, and immediately after college, I was very impressed. 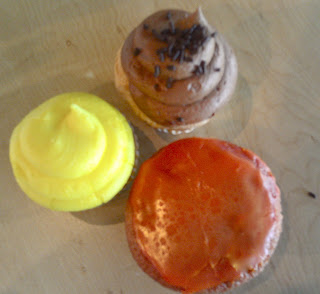 Now back to the flavors =) I have a picture of the cupcakes I tried above (taken with my cell phone, not super high quality). The yellow one on the bottom left is the Skinny Mini- a lemon flavored vegan cupcake, the one on top is the Angel Food Cake June Special flavor, which is an angel food cake with chocolate buttercream frosting, the Mimosa, on the bottom right is an orange cake iced with champagne orange icing and dusted with gold luster dust. My favorite was to my surprise, the vegan cupcake, the "Skinny Mini". I am normally not a fan of lemon flavors, and also was expecting "vegan" to = "icky". I actually could not get enough of this lightly lemon flavored cupcake! It was super moist and had a great texture. Imagine a health conscious, yummy cupcake! The Anglel Food cupcake was my second favorite, reminding me slightly of a toasted s'more, minus the graham cracker. They had 9 more flavors to sample, and rotate some out daily and monthly, I will just have to come back soon to try more!


If you have a cupcake tasting recommendation, or would like to accompany me on one of these adventures, holla at me!
Posted by Amanda at 6/22/2011